Utrecht Vs Amsterdam: 5 Reasons why you should choose Utrecht

When I talk to some people and I mention that I live in The Netherlands, first question is: in Amsterdam? Some people identify the whole country with just one city, which is not fair. The Netherlands has quite some lovely cities and I chose Utrecht. A very personal feeling, but I consider it the most beautiful one. Now, you're probably wondering why Utrecht is better than Amsterdam? Here following are my 5 main reasons.

And yes, I'm very curious to hear also what are your reasons why you think the place you live in now is better than everywhere else.

A lot of things are all within the city centre and walking distances. There are all kind of restaurants, cafes, pubs with live music, theatres and concerts. As well as different events to discover the city, like the Utrecht Free Tours (they do it in English too), or the Language Cafè where people meet on a weekly basis to learn and practise Dutch.

There are a lot of tourists and expats in both cities, but Amsterdam is kind of overcrowded. The government is trying to inspire people to visit other cities too and spread around the country the amount of tourists. I work in Amsterdam and, what I notice everyday, is that feeling of expats taking over. When entering a bar or restaurant, the first language (even from the waiter) I hear is English. Which makes things much easier for everyone, that's for sure, but at the same time too easy to avoid the Dutch culture. 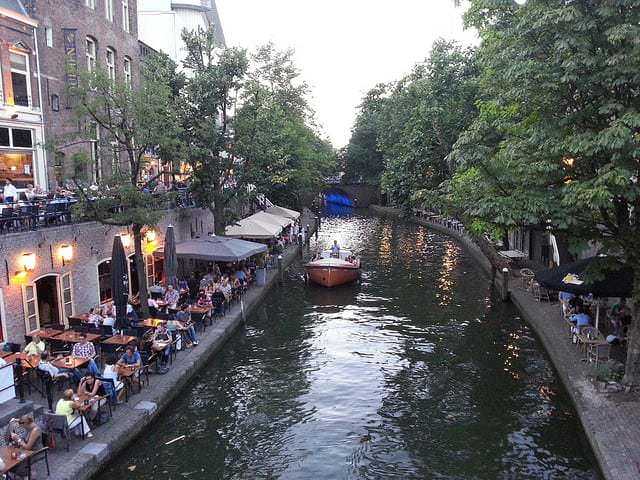 The canals of Utrecht are gorgeous. Canals are very popular in The Netherlands in general and you can find them in Amsterdam too. What you won't find for sure are the restaurants along the main canal...what makes it different? Utrecht is the only city in the whole country where restaurants have terraces just next to the water, basically same level as the water. The atmosphere is simply lovely.

There are quite some parks and gree anreas very close to the city centre, just to mention a few well known: Griftpark, Wilhelminapark, Oog in Al and Lepelenburg. In these last two, you can also find sun loungers to enjoy the sunny days. Also, Griftpark has an area with animals where kids can go and feed them - there's also an amazing playground, which I tried as a grown up and enjoyed a lot (yes, I admit that!).

5. Hoog Caterijne and the station.

A station? How can a station make Utrecht better than Amsterdam? Well... the Hoog Catharijne makes the difference! It's a huge indoor shopping mall right in the hearth of the station - or should I say connected to the station. Basically, as soon as you checkout from the train station, you're already in the mall. It has 113 shops, including restaurants and cafes. You can find anything you need here. And what happens when you go out? You're right away in the city centre.

So, what about you? What are your main reasons to choose Utrecht, Amsterdam or any other city you live in? :)