Boasting a healthy working-life balance, rich history and cultural diversity, and a rare combination of cosy village-like charm and metropolitan amenities, the Netherlands’ capital has been attracting expats for years—now, it’s the global tech community being tempted to relocate to Amsterdam.

Amsterdam was recently named the [best European tech city to work in]. The result is hardly surprising; home to more than 500 international tech companies, the city has also fostered a burgeoning start-up scene, and is teeming with roles across the IT spectrum.

A city powered by start-ups

There are already 60,000 tech jobs to be found—11% of the total job market—with 10,000 new positions added in the last two years. This growth has been driven largely by home-grown startups and budding tech businesses, which are promoting job growth of around 13% per year.

As the city’s tech sector continues to expand, its companies are in dire need of skilled IT talent. It’s estimated that there are around 26 job vacancies in the city for every available junior tech worker, creating a gaping skills gap ideal for international talent if they’re considering relocating to Amsterdam.

Amsterdam’s venture capital spending has tripled since 2014, and the Dutch government’s support for the start-up scene is on the up too. Last year, funding allocated to help develop the city’s 750+ startup businesses amounted to a massive €322m; up €128m on 2016. The city also houses a number of incubators, and organisations like tech hub TQ work to support international companies and professionals hoping to make a go of it in Amsterdam.

But it’s not just the up-and-comers making a home by the Amstel—the city is also home to the European headquarters of global tech giants like Uber, Netflix, and Tesla. 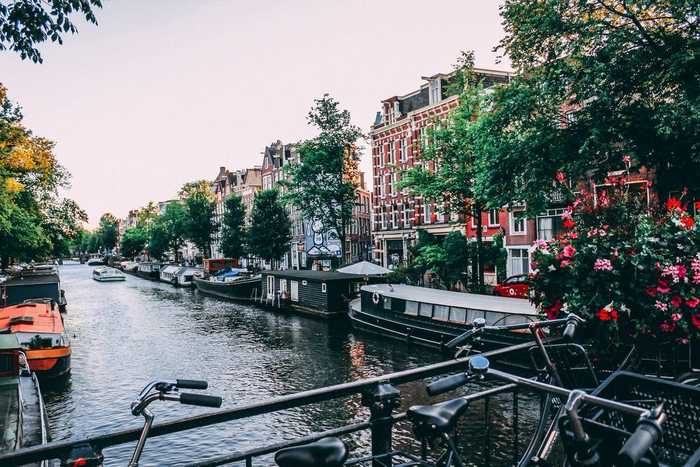 Dangling the carrot for international talent

Average salaries for tech workers in Amsterdam are another alluring bonus offered by the city. Wages for IT pros [tend to be higher in Amsterdam than in many other European tech hub]s like London, Berlin, Paris, and Dublin; software developers, for example, can earn between €2,750 €6,000 a month on average, depending on experience.

Coupled with the competitive salaries, cost of living in Amsterdam is pretty attractive too; one of the lowest of all Europe’s capitals. Though it varies depending on where, and how, you live, generally €1,000 €1,500 will be enough to cover essentials like rent, insurance, groceries, and public transport.

If the earning potential isn’t tempting enough already, international tech talent looking to make a home in Amsterdam can qualify for a 30% tax break, offered to skilled, high-earning foreign nationals to help lure the best talent to the city.

There are also schemes to help smooth the process of landing a work permit for those with desirable experience. Many highly skilled migrants are ushered through the permit process, provided they meet salary requirements, and their new employer is a registered participate in the HSM scheme. The program has no education requirements for applicants, making it accessible to skilled workers from a range of backgrounds. The salary threshold for the permit is also lower than for other routes to residency, document requirements are simpler, and it can take as little as two weeks to process.

What makes relocating to Amsterdam especially attractive to professionals working in the often competitive and fast-paced tech industry, however, is the quality of life on offer. There may be plenty of great jobs available, but you won’t be expected to be shackled to your desk.

So great is Amsterdam’s commitment to living well, that the city was ranked number one in the world for work-life balance in 2018’s [OECD Better Life Index]. The Netherlands also ranks above average when it comes to satisfaction with their lives in general; in the OECD residents of the Netherlands rated their contentment 7.4, significantly higher than the 6.4 global average.

Language and Culture: What’s the Connection?

Moving to Turkey: Life for Women