To Learn or not to Learn the Local Language?

Elena Filipovska-Bozinovska, a teacher of Macedonian at Skazalka, recently conducted a small research to examine the different perspectives of expats regarding the local language and culture in a country where one could easily get by with English. Around 70 people took part and here following some insights.

“So, I met an expatriate who lives here and doesn’t learn the local language,” commented my student while I was explaining the use of the short pronominal forms in the Macedonian language. “How does one feel being surrounded by incomprehensible sounds, signs, headlines…” continued my student with a thoughtful expression.

I raised my shoulders, trying to get back to the short pronominal forms. But, my student insisted on this topic. And, that was not the first time that a student had raised this question. The attitude of expatriates towards the local language of a country where they could easily get by with English is something that has always piqued my students’ as well as my interest as a Macedonian language teacher for foreigners.

To gain a better insight into the matter, I decided to conduct short questionnaires and learn more about different linguistic and cultural experiences of expatriates living in Macedonia.

Why do expatriates learn the language?

The answers revealed that most of the expatriates that learn the language (the “learners”) decided to learn it in order to communicate in everyday situations, to socialize, because of linguistic and cultural interest and for work purposes. 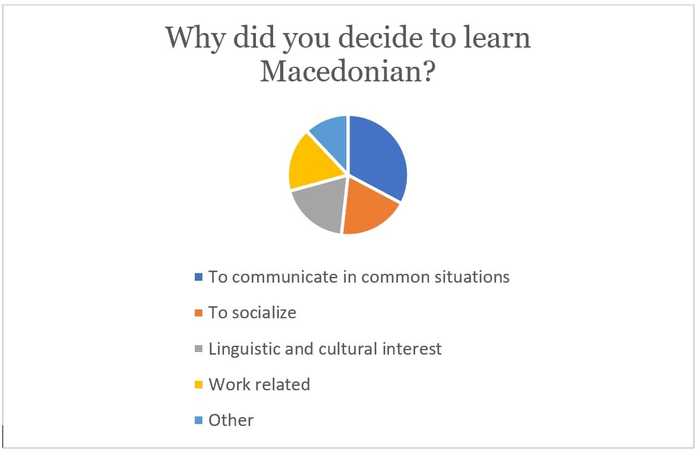 I was glad to read that the learners use the language to communicate with neighbours and friends. This reminds me of all the amazing stories my students have told me about their hanging out with neighbours on different occasions – like family and religious gatherings, preparation of some local foods, and drinks – which are a real cultural event and a memorable experience. One respondent even answered that they have “developed a closeness to some people which would be more difficult to achieve or simply impossible in my home country”. 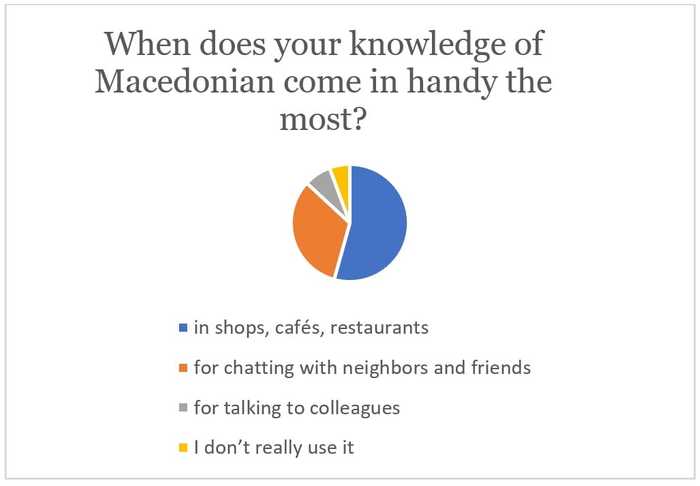 On the other hand, most of the expatriates that don’t learn the language (“non-learners”) find English sufficient for communication, they don’t have time to learn Macedonian or find it difficult to master. Non-learners would have found proficiency in Macedonian helpful in everyday situations like in shops, markets, restaurants and cafés, as well as in situations involving communicating with older people or people in rural areas. However, they stress that it happened rarely that they really needed Macedonian.

The thing that caught my eye was that I received 58 responses from learners and only 13 responses from non-learners. And among these 13, I still found learners. One spoke a similar language which helped them on a daily basis, another one acquired some basics of the language but had to take a break because of pregnancy and another one had just arrived and was planning to start lessons.

Apart from the discrepancy in the number of respondents between learners and non-learners, there was a significant difference between the two groups in terms of the answers themselves regarding their view of the locals and the culture.

Furthermore, when asked to explain what aspect of the culture bothers them, the non-learners gave some very sparse answers, if any. On the other hand, the learners offered a pretty extensive and detailed explanation of what exactly bothered them about the people and the culture.

The majority of learners put the lack of environmental awareness first. Right after comes the lack of driving culture. Third comes the “lack of respect for each other while waiting in line”, as one respondent put it. In addition, the differences in perception of personal space and time bother the learners.

The learners mention the different time for eating meals, a lack of punctuality, and as one responder said, “everything is slow”. Lack of maturity in politics and corruption are mentioned a few times. A few people find raising children very different than in their own country. One person talks about Macedonians “giving unsolicited advice”. “But other than these minor things” – end their long description this particular participant – “I love being around Macedonians. They are some of the most hospitable and caring people I have ever met!”

At the end of the survey, I spoke again with my student that raised the issue originally. By that time, he had already acquired the short pronominal forms and was struggling with the past indefinite tense. I told him that I really don’t have a good answer. After analyzing the results, I realized that I managed to hear the voices of the learners, while the non-learners remained silent in a way. Then again, one conclusion seemed plausible from the experience of gathering and reading the answers as a whole. The non-learners, at least in this particular survey, preferred not making strong judgements regarding the people and the culture.

On the other hand, the people who learn the local language seemed more involved in the local culture and keen to develop strong feelings about various aspects of the local people, the place and the culture and thus, I guess, create a far more complex insight into the country where they spent a year or a few years of their lives.

Elena Filipovska-Bozinovska has been teaching Macedonian and Italian since 2001. She has worked at private language schools, state high schools, and at the Ss. Cyril and Methodius state university of North Macedonia. In 2014 she founded Skazalka, a Macedonian language centre for foreigners, and she has taught there ever since.